The Ridiculous and the Sublime

By themselves, the words above seem harmless, or even uplifting. And yet, I cringe each time I hear a yoga teacher use them. What I call New Age Speak has become a pet peeve of mine.

I was at a yoga retreat several years back, studying in an idyllic setting with a celebrity yoga teacher. I was completely distracted by what she was teaching because she was using all these New Age buzzwords (and other words that I am almost positive she had made up). I became irritated because I couldn't understand why would she use these words, when there are others that are far more easily understood and less trendy. Was she was trying to compensate for feeling insecure? Did she want us all to know how much philosophy and psychology she had studied? Does she really talk this way in her everyday life?

I'm sure that some people do speak this way in everyday conversations. However, when we are trying to appeal to everyone and anyone, it's important - in my opinion - that we chose language that goes down easily.

I gave a stress management talk for a human resources summit once, and I asked them to stand up and do some yogic breathing. As I was talking them through an aligned standing posture, I mentioned the word "buttocks". A few nervous giggles broke out, and pretty soon the entire room of over 100 was laughing. I was so used to using anatomical terms that I forgot to change my language for the layperson. Years later, I still remember that lesson. 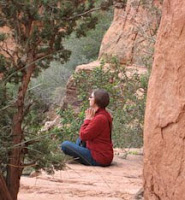 Last night, I watched a yoga documentary that included interviews with several of modern yoga teachers who are globally recognized. These teachers were asked to explain different aspects of the yoga practice and why it was so powerful. Some of them articulated the complex concepts with clarity and everyday language. Some of them used so many of these buzzwords that I became distracted again. I had to rewind the video several times, and by the end of the documentary, I was very annoyed.

New Age speak does not make your ideas more available; in fact, it can distance you from your audience. If you are going to use an unusual term, explain it; don't assume people know what you mean. There are always easier ways to explain whatever concept you are trying to get across. And,

if you don't know the concept well enough to phrase it in a simple way, then maybe you shouldn't be talking about it.

By contrast, when I am with a teacher who does have a clear grasp of the concept as well as the ability to express it in a way the audience will understand, those concepts sink in and take hold more easily for me. In those cases, I feel all the understanding was already there, hidden inside a locked case, but I just needed the right words to open the lock. Comprehension floods in and takes root. Those are the concepts that I can then easily express, without the need for fancy, flowery, superfluous New Age speak.

Posted by Lorien Neargarder at 12:00 AM