It's 6am. It's dark. I'm warm and comfortable, but I claw my way out from under the covers and my husband's lovely embrace to get ready for an Ashtanga yoga class that I am determined to take. The entire time I am getting ready, I question my decision. I even go back to bed at some point. Somehow, I get myself there and on time.

Erika Abrahamian is the teacher and she begins with a talk. This morning, she shares with us that she's been practicing along with another teacher's video, filmed in a live class, and has noticed some important citta, or mind-stuff, that she'd like us to be aware of in our own practices. We have certain expectations about our practice, our bodies and our abilities, she explains, and when she followed this video, she felt those expectations come up. The teacher in her video took his time explaining the details of how to get into each pose - sometimes this was several breaths, and then he would begin counting the breaths to remain in the pose; it was much longer than Erika was used to, and her mind presented her with lots of resistance. 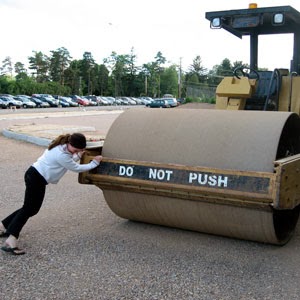 She asked us to look at our own obstacles during the practice and explore the practice of surrender, of letting go of wanting a different reality. Since my practice includes lots of adaptations to accommodate my injuries and strengthening my weakness, I know this yearning for a different reality all too well. Each time I heard the little voices of grasping, I tried to stay with it anyway and release or dampen the mental grasping. Over and over again. The mental grasping is like a weed in my mind; it grows rampant, if left unchecked. Soon, I'm not just desiring that person's handstand, but I'm also desiring that person's age or energy or life situation... I'm no longer inhabiting my own experience, my breath, in this moment. This is a shame, because all of it will end, eventually, and nothing is to be taken for granted - even my next breath.

I left the room feeling very humbled. I navigated through the crowd of people and collected my things, then paused to check my messages...

22 years ago, someone who abused me as a child had begun the process of reaching out to make amends. My grandmother was sick at the time, and I was filled with resistance about her cancer. I had no time to accept the offering from this man - no matter how real and heartfelt it may have been. He left his amends letter for me at my grandmother's house and I tore it up, unseen. There was a story in my head, one that cast this man as the monster and me as the victim, and I resisted letting that story go. Over the years, he has reached out several other times, and each time I resisted. Two years ago, after doing some very intense therapy, I decided to rewrite the story. I let go of the mantle of victim and I peeled off his monster's mask. I reached out to him. I sent him a message that said I forgave him and wished him well.

I heard nothing until today.

When I looked at my messages, I didn't recognize the name at first. And then I realized who it was from. The communication I sent two years ago finally reached him. He replied back with grace and love, and the bricks of resistance I had built up around my heart were gone.

Breath by breath. Step by step. Thought by thought. Moment by moment. Practice by practice.

Thank you to my gurus: to the painful childhood memories, to my own mind who clings, to my teachers along this path, and to the breath that I have the privilege to breathe.
Posted by Lorien Neargarder at 12:16 PM