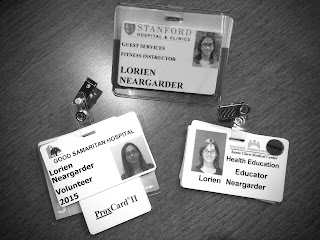 A regular yoga practice has made my life better, in so many ways. I know that when I’m at my worst, most desperate state, my practice is there. But it doesn’t always look like an asana practice; that is to say, my yoga doesn’t require me to roll out my mat and do several rounds of Sun Salutations. It’s great when I can do that, but practicing something – anything – during those trying times helps me reclaim perspective and clarity.

I have taught yoga in some interested places: adult education centers, elementary schools, corporate conferences, airports, beaches, parks… But the place I find the most use for yoga is in a hospital. I’m sharing here some of my more memorable hospital teaching experiences.

As yoga becomes more well-known to the medical community as a supportive healing tool, more and more hospitals are willing to adopt yoga practices. I received a call to teach yoga to the psychiatric patients at Stanford Hospital a few years back, and I was excited and curious how I could be of service. When I arrived at the hospital for my first class, I realized that the staff was looking at the practice from a purely physical perspective, like another fitness class. As the weekly class continued, much of that changed. The logistics of the class were the most challenging part of teaching there. Yes, the patients had their moments of challenge, too, but for the most part, they remained very open and tried their best to follow along despite heavy medications.

It was here that I began to understand the power of brain chemistry. Asana, meditation, breathing, etc. can only do so much if the brain chemistry balance isn’t right.

I met a woman one week who seemed a bit out of place there. She was so competent and clear-headed that I mistook her for a staff member at first. She followed the breathing, body awareness, movement and relaxation practices with what seemed like ease. The following week, I saw her as soon as I entered the ward and went up to her to invite her to class, but I could tell something was wrong. Her breathing was labored and she couldn’t seem to think clearly enough to get a sentence out. She told me she was afraid to walk to the room for yoga because she was unsteady on her feet. I got her a nurse to escort her and she tried to follow along for the first few minutes of class, but left in tears. (One very nice thing about teaching in a supportive ward is that I knew that her nurse would follow her to be sure she was okay, which let me continue the class without worry.) The following week I returned and she came back to class, much clearer than before. She told me the week prior she had been detoxing from her anti-anxiety medications, which sent her into a panic attack. With her heart and mind racing, not to mention the physical discomfort of withdrawal, she was unable to use her mind to observe and calm her mind.

I believe whole-heartedly in the power of yoga to adjust for chronic conditions, but when the situation turns acute, I respectfully bow to the power of chemistry.

The Yoga Piece to the Chronic Pain Management Puzzle at Kaiser

Several years ago, I was contracted to teach yoga as part of a team of providers working with chronic pain patients at the Santa Clara Kaiser location. The program is run like an intervention, providing patients with tools to learn about their pain, how their brain processes pain, and how to stop the pain cycle. In this program, I am one tool in a multi-disciplined toolbox, which includes medical experts, behavior experts, movement experts and nutrition experts. In addition, the patients support each other in a community of similarly conditioned humans. The yoga practice that I offer them has been honed down quite a bit from what I originally expected them to be able to do. It was clear from the first week of working with these patients that the debilitation, deconditioning and sensory-motor amnesia that occurs with long-term pain (and medications) required a softer, subtler approach. As a teacher, I am constantly asking these patients to say yes when their habit has been to say no, a habit that comes from a deep part of their brains that tells them to stay away from pain. In order to ask them to breathe, track sensation and – possibly – move their bodies, I need to meet them where they are. Before I teach them, I have a “huddle”, a meeting with all the providers who share with me the patients’ mobility, medication and mental issues, as well as giving me their insight on the group as a whole, so that I have some insight about how to approach them most effectively.

Some of the patients have been very resistant to yoga. Some have overcome that and now embrace yoga, while some have not. What’s so impressive about this program is that you don’t have to love all aspects of it. If someone doesn’t like yoga, there are other methods of healing movement. What’s important is that the patients – we humans – stay open, and keep trying.

On a side note: for those of you who many be interested in working with chronic pain, I will be leading a yoga workshop next year, along with one of my colleagues from this Kaiser program. Stay tuned for more details as they are finalized.

This year I began a program at Good Samaritan Hospital in San Jose. I teach breathing practices to cancer patients in their hospital rooms. I was inspired to do this because of so many of my Yoga for Cancer Survivorship students telling me, “I love this practice, but I wish I had started sooner in my recovery.” I thought about what I could offer in those difficult moments, and the breath work was born.

I teach a sequence of breathing that meets the patient where he or she is – most likely in a state of stress, and then steps them through different techniques until the breath is smooth and calm. It takes 5-10 minutes and has fast results. Most patients reported feeling calmer, less nauseated, in less pain or more focused.

When I enter the rooms and ask if they’d like to practice Healing Breathing with me, I know I won’t get everyone to participate. It’s fine with me if they say no right then; I let them know I’ll be on the ward a little while if they change their minds. It’s also fine with me if they tell me the breathing had no affect on them; perhaps I’ve planted a seed for some pranayama practice later. And if they don’t have the concentration to receive it, I’ll limit the practice to the simplest form: watching the breath. That can be enough that day.

These situations and patients have taught me so much. Yoga is a great tool for living better, and it has its limitations, but there is always something we can do. Stay tuned for more installments of Living Better with Yoga...
Posted by Lorien Neargarder at 9:43 AM