Recently, a friend wrote as her Facebook status, "In my heart I know I want to be a better person. Sometimes I succeed, more often I need to try harder." I was moved by her words, by the honest and universal longing that we all have - that we have always had, to be a better person. After a challenging month of feeling the same way, I reflected on the tools that I have to help me. I turn to the Yoga Sutras.

Patanjali's Yoga Sutras are dated back to 200-300 CE, and provide guidance for practicing yoga, though most of that guidance is related to the mental challenges, not the physical ones. In Sutra 1.33, Patanjali gives us a wonderful recipe for finding peace of mind:

Maitri karuna mudita upeksanam sukha duhkha punya apunya visayanam bhavanatas citta prasadanam
"The mind becomes tranquil through the practices of friendliness toward the happy, compassion toward the miserable, joy toward the virtuous, and equanimity toward the non-virtuous." (translation from Gary Kissiah's book, The Yoga Sutras of Patanjali)

When I read this, I feel that sutra 1.33 is describing someone who already has peace of mind. What about the rest of us? How do we scale the ladder from where we are now to these lofty mental heights?

First of all, we dismantle the ladder. We are all capable of this kind of peace of mind, just as we are all capable of thinking and acting unskillfully. Accepting our power to change is important. The Buddhists call the first four concepts in this sutra The Four Immeasurables, and teach many techniques for meditating on and cultivating them. These are the practical tools that we can apply daily to bring about change. 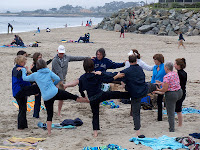 Maitri is the concept of friendliness, and Patajali tells us that our first step towards a peaceful mind is to be friendly. Maitri is also the root of the word, metta. During the Victorian age, when much of the Indian philosophies were interpreted and a love for New Age began, someone translated metta as being "loving kindness". That's a softer concept than most of us can grasp. Friendliness, however, is more accessible. You know when you are being a good friend, or not; you know when you are being treated as a good friend, or not. We are often better friends to others than to ourselves!

All this month, I will be leading guided metta meditations on Sunday nights at Breathe Los Gatos. These are free classes. If you would like to come sit with us and focus on bringing more metta into your daily life, please join us.

Karuna is the second word in Patanjali's Sutra on finding a tranquil mind, the second of the Buddha's Four Immeasurables, and the name of my dorm when I stayed at Spirit Rock for a 5 day silent retreat. (I spent considerable time contemplating that non-coincidence!)

Karuna means compassion, and in this context, compassion towards those who might not normally elicit your compassion. From the little things to the big things, we are given the opportunity to explore karuna daily.

When I experience some injustice, it's easy to objectify the person who caused the injustice, and to view him or her as an object which either gets me what I want, impedes me from getting what I want, or just doesn't exist at all. Think about how often you do this. How do you respond to someone begging for money, or picking up trash along the side of the highway in an orange jump suit, the street musicians who greet you outside the HP Pavilion, or the zealot who yells at you on the corner about God?

If I employ the concept of karuna I may see, instead of an object, a person with hopes, dreams, fears, skills (or lack of)… in short, another human being. This practice is much easier to do with strangers than with people close to us. The coworker who's making your workdays unbearable? Try finding someone who knows him or her quite well and ask about them. You may surprise yourself the next time you connect.

Earlier this year, I received a link to this short video. It was meant to educate those who work in hospitals, to remind them of this concept, but you can easily apply to situations close to you. It's about 4 minutes long and a great example of karuna.

Mudita is the Sanksrit word that doesn't have a direct translation. Shared joy is one way to describe it, but it's more than that; it implies that we support our fellow man who has integrity in the face of adversity, and finally been recognized. For example, in 1990, I was very moved when I heard that Nelson Mandela was freed after 27 years of political imprisonment. I was happy for him, his family, his country and the entire human race. It brought on such a swell of positive emotions in me!

Mudita means shared joy, but there is an implication that we all rejoice when someone is released from suffering... and we all benefit.

Upeksanam is, in my opinion, the most challenging of the mind states to practice. In Kissiah's translation, it means "equanimity towards the non-virtuous". Equanimity is a state of mind that is calm, especially in the face of challenge. If I have been practicing the previous three states of mind, then I have a better chance of meeting someone I discern as non-vituous with a calm mind. If I haven't, then my inner fighter may step forward to do battle, contributing to the violence in the world. When I decline the opportunity to react, it may seem as though I am giving someone a pass for their behavior; actually, I am giving myself a chance to do less harm to my own self.

The person who cuts me off, runs a red light and nearly causes an accident? Instead of yelling, honking or otherwise adding to the chaos of the moment, I take a deep breath and wish them the same peace that I need. My balance doesn't come from tipping the scale with more fear or anger. Mandela wrote:

“As I walked out the door toward the gate that would lead to my freedom, I knew if I didn't leave my bitterness and hatred behind, I'd still be in prison.”

So, if you relate to my friend's post and wish to be a better person, then consider these four practices. Be friendly whenever you can; treat others with compassion, as you recall they too have hopes, dreams and fears; share joy with your fellow humans, struggling to make the world better; and let go of any negative thoughts towards those who act unskillfully.

I'll meet you on that path. Namaste.
Posted by Lorien Neargarder at 6:34 PM